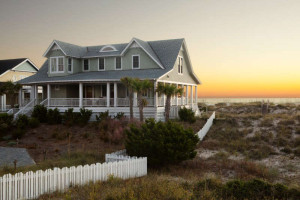 According to a recent article in the Wilmington Business Journal, luxury home sales ticked upward as November came to a close.

Six homes in the $1 million range sold in Brunswick County and three in the same category in New Hanover during the month of November, according to a luxury home market report released this week.

As of Nov. 30, there were 164 homes for sale in New Hanover and 84 in Brunswick with asking prices exceeding $1 million, stated the report, compiled from local MLS statistics by Wilmington-based firm Just For Buyers Realty.

In Brunswick, 33 of those listings were on Bald Head Island, while New Hanover’s were also in locations known for higher priced property: 31 in Landfall, 29 in Wrightsville Beach and 23 on Figure Eight Island.

The luxury market in general has been healthy in recent months in the Wilmington area and surrounding communities, Realtors say.

In November, the highest-priced sale of the month took place in Wilmington with the more than $1.7 million purchase of the home at 6808 Towles Road, according to the Just For Buyers report.

“The month showed strong activity in the luxury market with 12 homes going under contract,” the report said in an analysis of pending sales. “The two with the highest asking prices are both on Figure Eight Island: 2 Sounds Point Road at $3,300,00 and 310 Beach Road North at $3,180,000. The final sales prices will not be made public until the deeds record after these properties close.”

Nine new listings were added to the rolls in November, four in New Hanover and five in Brunswick, according to the report. The most expensive new listing is at 6417 Quail Run Road in Wilmington, a 6,500-square-foot mansion on 4.5 acres with a heated pool, an indoor custom spa tub for 12 and deeded water access. The home’s list price is nearly $2.5 million.

The most expensive home on the market at the time the report was compiled was 188 Beach Road South on Figure Eight Island, which has an asking price of $6.5 million. The next most expensive property is 2 Marina St. in Wrightsville Beach at $5.5 million. In addition to the house and a guest/rental apartment, the 2 Marina St. listing includes the Overbeck Marina with 17 boat slips, according to the report.