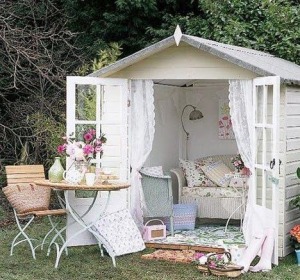 Move over Man Caves, “She Sheds” are taking storm now! Alright ladies, if you’ve just about had it with the man cave trend that’s been taking the industry by storm the last few years, it’s time to put your foot down and demand your very own space. And no, we’re not talking about your bedroom sanctuary that hosts a reading nook where you can go to escape the daily grind and lose yourself in a good book. We’re talking “she sheds.”

It may sound silly, but she sheds are popping up in backyards across the nation as women look outside the confines of their own home for a space that’s all theirs. It’s the (totally acceptable?) grown up version of claiming a space and then posting a ‘no boys allowed’ sign prominently on the door.

Much like pub sheds, “she sheds” are the latest craze in the battle to add a touch of personality to any and every space. Whether you’re looking for a tranquil environment to practice yoga, a quiet space to work on your writing or just a place to get away from the stresses that come with your day-to-day routine, “she sheds” run the gamut from rustic to extravagant.

Need a little inspiration? Check out the pictures that we found on the Lighter Side of Real Estate site and start planning what your “she shed” will look like today!

Lighter Side of Real Estate

END_OF_DOCUMENT_TOKEN_TO_BE_REPLACED

Crews are digging a 32- to 40-foot-wide trench in the sand, then placing rock-filled geotextile mattresses on the leveled surface. After that, they’re stacking large boulders on the specially constructed mattress pads.

Work is going slowly because the contractors have to pump water from the excavation and make sure the construction area is perfectly flat and at exactly the correct elevation, said Chris McCall, shoreline protection manager and assistant village manager.

“The terminal groin is moving along,” McCall said. “They are putting the rocks in place.” Orion Marine Group crews place a six-by-20-foot mattress on the construction centerline, then place additional pads on each side of the center mattress.

The mattresses go down first so that the heavy boulders won’t subside into the sand.

McCall said the crew was averaging eight to 10 mattresses a day. They are staging mainland operations just east of American Marine Co. on the Intracoastal Waterway at Oak Island.

When finished, the terminal groin will be 1,300 feet long and reach into the Atlantic about 300 feet. It is designed to capture some, but not all, of the sand that washes by in the longshore current.

Construction is expected to wrap up in October. Technicians will monitor the groin’s performance for at least two years before the project engineer decides whether to add another 600 feet to the structure.