Why we have the Cape Fear River Pilots

Since Europeans first viewed the area, the river known ominously as the Cape Fear has been vital to the fortunes of both buccaneers and businessmen. History shows it was the pirate Stede Bonnet – by most accounts a poor sailor who already had been convicted as a pirate and pardoned – who may have realized the river’s name. After returning to piracy, he tried to escape capture in the early 1700’s by hiding up the Cape Fear. But he forgot the first rule of pirates – always have more than one escape route. Bonnet was caught as soon as the British reached the mouth of the river.

Union vessels didn’t have as much luck with the blockade runners of the Confederacy, who continued to escape capture and bring needed supplies back to the port at Wilmington during the Civil War. In fact, Wilmington was the last port open to blockade runners. When it finally fell in early 1865, it signaled the end of Confederate hopes.

Since then, though, most seagoing traffic hasn’t needed an escape route – merely a North Carolina berth. That meant the Cape Fear River in Wilmington, and the deep water harbor at Morehead City. When North Carolina’s first major port development began in the 1850s at Morehead City, harbor pilots began bringing in ships through Beaufort Inlet.In Wilmington, the river pilots became crucial during the Union blockade of the South during the Civil War. They would steam down the coastline and bring back needed supplies to the port, making Wilmington the last port open to blockade runners. 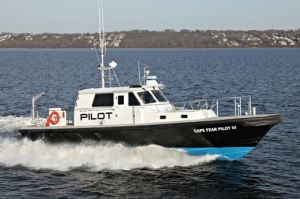 In the years before modern dredging and channel deepening of the river, known ominously as the Cape Fear, captains used local pilots to maneuver the sandbars at the entrance of the harbor and of Frying Pan Shoals, more than 20 miles offshore. “Think of the captain of a large ship at Cape Fear as a blind man entering an immense, strange house, cluttered with unfamiliar furniture and other hazards, with only one entrance and one exit,” writes Jim McNeil in Masters of the Shoals.

Because of the pilots’ daring runs and narrow escapes, they often were romanticized in publications as “dandies of the town,” according to an article excerpted in Masters of the Shoals. “They wore fine ruffled shirts, tight fitting boots, long black coats and plug hats,” the author writes. “Every boy hoped someday to become a pilot.” “Without pilots, captains would be burdened. There is so much paperwork involved in every port visit, and (captains) go to so many ports around the world that they can’t know each river and port,” says Kirby. Federal regulations say that all “coastwise seagoing vessels propelled by machinery and subject to inspection” must be under the direction of a qualified pilot, along with vessels “not authorized by their certificate of inspection to proceed beyond (a specified) boundary line which are in excess of 1,600 tons, propelled by machinery and subject to inspection.” In more understandable terms, that means: “Every freighter, every big ship you see coming in this port has got a pilot in it,” said Scott Aldridge, river pilot and former president of the Cape Fear River Pilots Association.

In the Port of Wilmington 90 miles south of Morehead City, eight river pilots guide ships from a sea buoy in the Atlantic Ocean, past Bald Head and Jaybird shoals, and up the Cape Fear River.
“You have to navigate all the turns and bends in the river,” said Wes Kirby, then president of the Wilmington/Cape Fear Pilots Association. “Every bend has localized shoaling.” As river pilots bring the ships close to their berth in the Wilmington port, the docking pilots take over and use tugboats to push the vessel alongside its berth. Docking pilots also use tugs to undock vessels and turn them around so they can head down the river and out to sea.

Pilots have been around North Carolina ports for hundreds of years.

“Without pilots, shipping would come to a halt.”